As the night fell, Qianxun sat in the yard and enjoyed the cool night breeze after supper. Her husband came over with two fans and handed one to Qianxun, asking with concern: “What are you thinking? You look upset after coming back from the meeting with the co-workers. What happened? Tell me.”

Qianxun sighed: “Now is the crucial moment for the return of the Lord. However, lots of brothers and sisters grow cold in faith and love. Today Sister Liu and Sister Zheng didn’t come for the meeting again. I have visited and supported them many times with Sister Xu. Though we talked about a lot with them, however, we couldn’t provide new light. We couldn’t solve other people’s problems either.”

Ruiming sat down and looked at Qianxun saying, “I feel that the Holy Spirit has left us. No matter how hard we work and how we pray, there is no enlightenment of the Holy Spirit. The sermons are just words and doctrines without any new light; the church has gradually become a place for dinner, making friends and direct selling. Co-workers compete against each other and form cliques. Lots of brothers and sisters follow the trends of society and pay attention to seeking pleasure rather than attending meetings regularly. The situations are similar across all denominations. It seems the religious world has become desolate to a degree.”

Qianxun thoughtfully said: “I have been pondering recently. In all these years through our faith in the Lord, we have been holding on to the name of the Lord, forsaking all to work hard for the Lord and waiting for the Lord to descend to bring us into the kingdom of heaven. However, in this crucial period of welcoming the Lord’s return, the church becomes more and more desolate; we are getting darker and darker inside and can’t feel the presence of the Lord as if we have been abandoned. What’s going on? Thinking of these, I feel unassured. Is there any deviation in our practice of waiting for the Lord?”

Ruiming thought for a while and said to Qianxun: “The Bible says, ‘And then shall appear the sign of the Son of man in heaven: and then shall all the tribes of the earth mourn, and they shall see the Son of man coming in the clouds of heaven with power and great glory’ (Matthew 24:30). ‘Behold, he comes with clouds; and every eye shall see him, and they also which pierced him: and all kindreds of the earth shall wail because of him. Even so, Amen’ (Revelation 1:7). In the last days, the Lord will surely come in the clouds of heaven with glory and take us back to the kingdom of heaven. It cannot be wrong.”

A Seeking Heart Is Needed

Early in the morning the next day, the sun rose from the clouds and reddened the clouds in the sky with mild sunshine. Qianxun’s family was eating breakfast in the yard. Her son looked at his cell phone and laughed from time to time. Qianxun frowned and said: “Finish your breakfast first. Play on your phone later.”

“Mum, I am laughing at the guy in the story. Let me read this story for you. When it flooded in Jiangnan area one year, a Christian just waited for the Lord Jesus to come and rescue him personally. He didn’t accept any other rescue methods. A lifeboat came and he rejected it; a helicopter came and he wouldn’t get on. He believed that the Lord Jesus would come personally to rescue him. It turned out that a huge wave came and killed him. Dad and mum, isn’t this Christian too silly?”

Ruiming nodded and said: “He is really too silly. How come he was so stubborn? He was killed by his own imagination.”

Silent for a while, laying down her bowl and chopsticks, Qianxun frowned slightly and said: “Ruiming, why do I feel like we are the same as this Christian? We have been waiting for the Lord to come back in the clouds of heaven. God said: ‘For my thoughts are not your thoughts, neither are your ways my ways…. For as the heavens are higher than the earth, so are my ways higher than your ways, and my thoughts than your thoughts’ (Isaiah 55:8-9). God is supreme. We are just tiny creatures. How could we know God’s work and His intention? According to their imaginations, the Pharisees ascertained that God’s name was Messiah and that anyone who wasn’t called Messiah was not God. In the end, they nailed the Lord Jesus to the cross and were punished by God. If we ascertain that the Lord will come back in the clouds of heaven only according to one or two verses, don’t we make the same mistake as the Pharisees: defining the Lord’s appearance according to imaginations and conceptions? Thinking of these words, I felt unassured and insecure.”

Ruiming thought for a while and said: “You are right. The Lord Jesus said, ‘Blessed are the poor in spirit: for theirs is the kingdom of heaven’ (Matthew 5:3). We shouldn’t define the work of God according to our imagination. We need a humble and seeking heart. Shall we study the Bible after breakfast?

They Got New Light After Bible Study 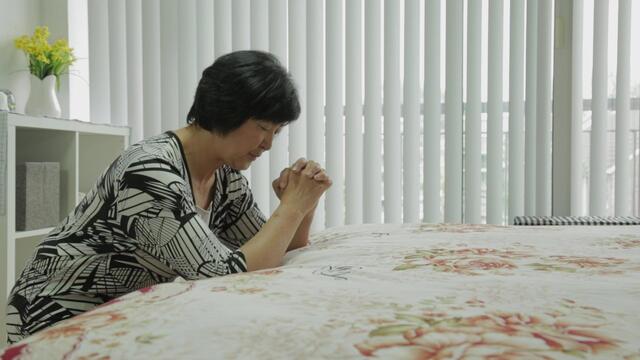 After breakfast, Qianxun and Ruiming prayed first and then opened the Bible looking for the prophecies about the Lord’s return.

Suddenly, Qianxun was surprised as if she had discovered a new world and said to Ruiming: “Look! Matthew 25:6 says, ‘And at midnight there was a cry made, Behold, the bridegroom comes; go you out to meet him.’ The prophecy says that the Lord will return as a thief!”

Ruiming took a look at the bible. Then he was lost in thought without saying anything.

“There are also prophecies in Revelation about the secret return of the Lord: ‘Behold, I come as a thief’ (Revelation 16:15). ‘Behold, I stand at the door, and knock: if any man hear my voice, and open the door, I will come in to him, and will sup with him, and he with me’” (Revelation 3:20), Qianxun continued to talk with Ruiming.

Ruiming asked in confusion: “It mentions that the Lord will return as a thief. Is there another way for the Lord to come back? However, the Lord clearly predicted that He will publicly descend on a cloud to take us in the last days. Why does it say the Lord will come as a thief here? What’s the mystery here?” Holding the Bible, Ruiming slowly moved to the window.

Qianxun held a cup of tea and took a drink, saying: “I reckon there is a mystery here. The Lord prophesied that He would come as a thief. ‘As a thief’ means coming quietly and silently. Does it mean that the Lord will come secretly? If so, we cannot define that the Lord can only come in the clouds. I reckon we should seek and study about the Lord’s return carefully!”

Looking at Qianxun, Ruiming whispered: “We have read these verses before; how come we have never paid attention? Isn’t it the Lord’s enlightenment that makes us notice those prophecies today? We shall seek carefully about the Lord’s return!”

Qianxun nodded: “Yeah! We have always kept the idea that the Lord will come publicly in the clouds of heaven and didn’t notice there are also prophecies saying that the Lord will come secretly. Did we make the same mistake as the foolish Christian in the story our son told us? The Christian prayed to the Lord to come and rescue him. However, the Lord didn’t come to save him according to his imagination but in another way, so the Christian kept his own imagination and didn’t accept the rescue. In the end, he was drowned. His conception and imagination killed him! Hey! Ruiming, we have been waiting for the Lord to come in the clouds of heaven to rapture us. If the Lord doesn’t come in the clouds of heaven as we imagine but come secretly in a different way, shall we believe in and follow Him? If we keep our own conceptions and imaginations and refuse to accept Him, are we going to be abandoned by the Lord and miss His salvation?”

Ruiming looked down at the Bible in his hand and agreed: “This question really deserves our thoughtful thinking! According to the prophecies in the Bible, there is more than one way in which the Lord will come. The Lord may come secretly first, and then appear to us in the clouds of heaven! It seems that we really need to seek the Lord’s intentions on His return. If the Lord has already come back secretly as a thief but we don’t seek and investigate, it is highly likely that we will be abandoned! So how shall we welcome the Lord?”

Listening to God’s Voice Is the Key

Qianxun said: “In Revelation, it says, ‘He who has an ear, let him hear what the Spirit says to the churches’ (Revelation 2:7). The Lord Jesus also told us, ‘I have yet many things to say to you, but you cannot bear them now. However, when he, the Spirit of truth, is come, he will guide you into all truth: for he shall not speak of himself; but whatever he shall hear, that shall he speak: and he will show you things to come’ (John 16:12-13). Peter, John, Nathanael and other disciples recognized that the Lord Jesus was the coming Messiah by His words. Finally, they chose to walk out of the temple and followed the Lord Jesus, receiving God’s salvation. So, we shall pay attention to hearing where there are people witnessing the Lord’s return and look for where there are the utterances of the Holy Spirit. Isn’t it easy to find the Lord’s footsteps in this way?”

Ruiming nodded and agreed: “Praise Lord! You are right. It’s new light. We shall go to seek Lord’s footsteps and cannot wait passively anymore. The Lord promised us: ‘Ask, and it shall be given you; seek, and you shall find; knock, and it shall be opened to you’ (Matthew 7:7). I believe as long as we truly seek, the Lord will surely lead and enlighten us!”

At this time, the sun shined on the faces of Qianxun and Ruiming through the window. They kept fellowshiping with smiles on their faces …

Source from: Find the shepherd